By Abhishek in General, Uncategorized

Microsoft Windows XP Service Pack 3 fixes a range of bugs in Windows XP. It doesn’t matter what XP updates you have previously applied to your system, SP3 will update any unpatched, partially patched or completely updated system (it includes all previously released patches and updates). XP SP3 fixes the security holes so you won’t get attacked. 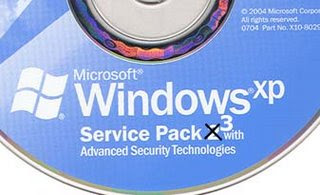 Microsoft periodically combines updates, fixes, and other improvements into a single package – Service Pack. Microsoft develops updates, fixes, and other improvements that address issues reported by the company’s customers and partners. To make it easier for customers to get these updates and enhancements, Microsoft periodically combines them into a single package, and makes that package available for all Windows customers.

These packages are called service packs”, Microsoft revealed in the introduction of the Overview of Windows XP Service Pack 3. With the Release Candidates of Vista SP1 and Windows Server 2008 heading to increased testing pools the past week, and with Microsoft cooking the first public build of the first refresh for its latest Windows client, the official overview for XP SP3 is the only crumb from the service pack fiesta over at the Redmond company. The Release Candidate of XP SP3 in a pre-final stage has already shipped to MSDN and TechNet subscribers.

As of March 25, 2008, Windows XP users are able to grab their very own XP SP3 RC2 Refresh Build 5508. The latest development milestone of the third and final service pack for XP is available for download exclusively via Windows Update, the update infrastructure Microsoft has built for its operating systems. Unlike the previous XP SP3 Release Candidate 2, Build 5508 does not come as a standalone package.
“The purpose of RC2 Refresh is to validate improvements to the Windows Update experience with Service Pack 3. Therefore, this beta release will be available only on Windows Update, in English, German and Japanese. Beyond fixes for common Windows Update issues and the inclusion of support for HD Audio, there are no substantial differences between this beta release (build 5508) and XP SP3 RC2 (build 3311)”, revealed the Release Manager for Windows Serviceability.

Build 5508 is offered as an update to Windows XP SP2. This release does not support build to build upgrades, and this is why Microsoft is advising all XP SP3 testers to uninstall the RC2 Build 3311 version before applying Build 5508. At the same time Microsoft warned end users that despite the public availability of XP SP3 RC2 Refresh, the release is still a beta build and should only be deployed in testing environments.

XP SP3 RC2 Refresh includes all previously released updates for the operating system, similar to earlier service packs. It also includes previously released updates to the latest versions of some system components, as well as functionality that make it easier for enterprises to co-manage both Windows XP SP3 and Windows Vista PCs within same corporate environment”, added the Release Manager for Windows Serviceability.

What Microsoft is essentially offering with the download for Build 5508 is a script designed to tweak the registry of Windows XP SP2 systems in order to help them identify XP SP3 RC2 Refresh over the Windows Update servers. Without the registry tweak XP SP2 machines will not detect RC2 Refresh.

You can download this new release of SP3 directly at Here.