How Does Android Makes Money?

By Abhishek in Google

Google’s decision to enter into mobile market was never about money but to lead the next generation of personal computing.

In 2005, when Google acquired Android its primary purpose was to stop iPhone domination. Also, Google wanted to promote mobile local search and thus nearly all the phones at that time had dedicated search key. Slowly, the giant got interested in whole lot of activities and designed an ecosystem such that you are never away from any Google service.

If latest reports are to be believed, Android generated just $550 million since 2008. However, Android has 68.8 % market share in smart phone category (iPhone’s iOS has 16.9)(source). For a $38 billion revenue company, $550 million from licensing earnings do no good.

The answer lies in secondary revenue stream generated from Google products on Android. Though Android is an open source project, but it is designed to funnel money into Google’s pocket. Here are some of the ways Android indirectly makes money for Google – 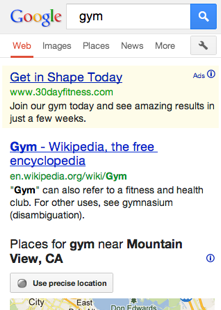 No points for guessing. Default search engine for Android is Google which is nearly impossible to change. Therefore all the searches are taken to Google’s result page which is filled with relevant advertisements. More the number of mobile searches; more is the money for Google.

#. Play Store – App purchases
Google takes 30% transaction fees for each paid app sold in its market place. For ebooks, Google has a subscription model where it charges 10% of overall revenue from publishers.

#. Selling MP3’s
Just like iTunes, Google Music is emerging as big intermediately between record labels or music companies and consumers. Google takes 30% cut for every song purchased/downloaded from their platform and also charges users for additional storage space in the cloud.

#. Licensing technology to carriers and handset makers
Google does not earn money directly by selling hardware like Apple but it sure earns via licencing its products. Though Android as an operating system is free, but not the mobile technology and neither the Google preinstalled apps like Gmail and Maps. Though licensing does not generate significant part but anyways another means for money.

In 2011, Google has publicly announced that they are targeting $10/device/year and most of it from royalties and advertising. As there are more that 500 million Android devices in total, you can yourself estimate the total revenue.