We unknowingly started with a random act of kindness. After helping out an unknown stranger, we thought let’s do it again. And again. And so Gtricks was born.

From the start, we were clear that the blog-in-making will be about people. It will only have handy content that people can actually use. Later, we focused on Google because of a lost bet. After realizing that Google has become center of our lives, we attentively followed it.

Back in 2007, Abhishek helped a friend on some computer related problem by writing troubleshooting steps in a mail. At that time Abhishek was about to graduate and join a large IT organization (Infosys) as a software engineer within a few months. In his desperate attempts to kill free time, he happened to discover Blogspot. For his future reference and to help others, he published those steps in a newly made blogspot blog. Few days later, he started getting emails and comments from strangers thanking him for the solution. Just like any other boy of his age, he was thrilled and happy for helping out people.

One sudden day, an unknown gentleman offered him a donation for that blog piece. he declined his offer but that random act of kindness laid the foundation of Gtricks. Since that day, he decided to make that unknown person’s happiness as a purpose of this blog. And therefore since inception, Gtricks has only one vision – “To Deliver Happiness”.

Initially, he wrote on all sorts of topics that one would find interesting and would love to read. But in the same year, a friend from college challenged him to Google everything before actually doing it. He realized that Google always comes up with better ways than he knew. Though he lost the bet, but realized how better our lives could be if we had all the knowledge from and about Google. Till this date, he is ardent Google fan and will always be. Therefore, he started focusing on applications and unpopular tricks to make most out of Google and its services.

There seems to be an alignment between Gtricks mission to deliver happiness and Google. Happiness can be most efficiently delivered by providing value to readers. Writing about useful applications and personal organization tips on Google services result in people working smarter, saving time and increasing their efficiency and ultimately making them happy.

In 2011, Abhishek was very much contented by his full-time job. In the meantime, Gtricks grew phenomenally and became mildly popular with 200,000 page views per month. He then decided to quit his job because it has become extremely difficult to focus on Gtricks with full time blog. Also, he joined MICA for an MBA course to learn more about Marketing and Branding for Gtricks and to find higher purpose for himself.

Some day during that time, when Abhishek was sitting casually at chotta (MICA’s Canteen) making doodles on tissue papers and suddenly Gtricks model struck him like a God send epiphany. An established system becomes necessary for a blog to run indefinitely. If Gtricks aspire to enrich people lives, it needs proper method to do it in a cordial manner. It needs both revenue and content to maintain its essence. It needs coordination and effort from all. Hence, Gtricks Forum was launched where people can share their opinions and useful tidbits on Google Services. There is now even distribution with evergreen productivity articles on blog and news and troubleshooting in the forum. Anyone can seek help in the forum and army of Google fans will always be ready to guide them. Also, the forum ensures freshness and relevance. 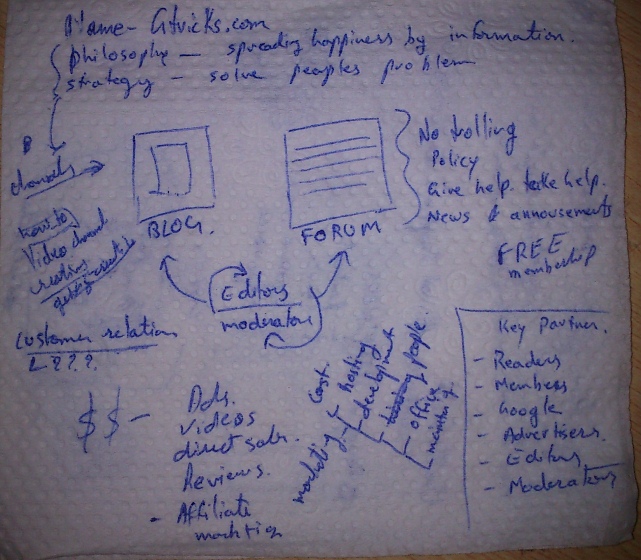 So, technically you can say that Gtricks that you are looking now is basically a result of idea written on a tissue paper.